The story of the Carpenter Bees and Digital Fixers!

Today, 20th May, is World Bee Day. This seems like a great day to release the Digital Fixers Bees into the digital wild.  Bees?  Yes, bees.  Perhaps a bit of background…

Back in February, on one of our many video chats, Nic announced she wanted a bee. Now, I adore bees, but it did seem a little random.  My first instinct was that Katie, our brand manager, would never agree to it!

It wasn’t as random as I though. Nic had been speaking to Abbie Cornell, and Abbie thought bees would suit us.  Always industrious, working together, and Nic is in Greater Manchester, whose symbol is the bee. Although since the Manchester Area bombing, the entire North West has a special place in their hearts for Bees. 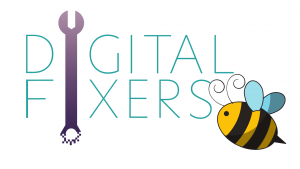 Emergency Call to Brand By Katie

Once you have decided to do something massive like add an animal/insect to your branding, you really do need to call in the experts.  And as I suspected, Katie’s’ first instinct was to say no, you can’t have it! We talked about some other female led animals. But the list is short!

Thanks to World Atlas) I can confirm it is pretty much limited to:

But Katie loves a challenge, so after the zoom, where we laughed loads and I sent Katie my take on what the logo should be (thanks to Canva) we sent her off to investigate.

An hour later she was back.  Can we zoom again?

Is it the spotted hyenas?  (It wasn’t)

And this was when Katie introduced us to Carpenter Bees.  They are amazingly on brand, being purple and blue.  And they are carpenters, so, they fix stuff!

A bit about Carpenter Bees

Carpenter Bees have a many different varieties. I was going to try and name some, but I wasn’t 100% sure, so I’m just going to leave it!  I was slightly disturbed to see that most of the search results were for pest control companies in the states 😲, so I have stuck to Wikipedia, and this Wildlife in France  website which both have some great images.

🐝 Carpenter Bees can live in solitude but most of the females live in small colonies with their sisters and daughters.

🐝 Their black shiny bodies have a bluish tinge, and the wings on certain species have a purple sheen to it.

🐝 Carpenter bees build their nests in soft wood. That’s fine if it’s a tree, but so many homes in America and Canada are made from wood, I can see the issues 🤣

🐝 The males don’t have a stinger, but the females do. They are reluctant to use it though, unless provoked

And so today, on World Bee Day, we are so very happy to release our Bees. We want to say a massive thank you to Katie from Brand By Katie.  If you want some behind the scenes of how the bee came to life check out the Brand By Katie Facebook Page and the time-lapse video she did.

Thanks also to Abbie, who planted a seed, that grew into a Bee colony 🤣 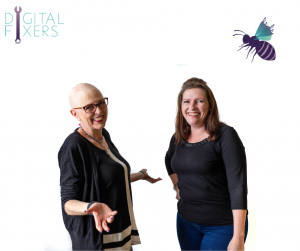 Want To Find Out More?

We believe that budget should not be a barrier to growing your business. As such, we provide a number of free and paid solutions for businesses and entrepreneurs wherever they are in their journey. We have a free business and tech support community, a ton of free content, as well as a paid membership, live events and 1-1 support.

This website uses cookies to improve your experience while you navigate through the website. Out of these cookies, the cookies that are categorized as necessary are stored on your browser as they are essential for the working of basic functionalities of the website. We also use third-party cookies that help us analyze and understand how you use this website. These cookies will be stored in your browser only with your consent. You also have the option to opt-out of these cookies. But opting out of some of these cookies may have an effect on your browsing experience.
Necessary Always Enabled
Necessary cookies are absolutely essential for the website to function properly. This category only includes cookies that ensures basic functionalities and security features of the website. These cookies do not store any personal information.
Non-necessary
Any cookies that may not be particularly necessary for the website to function and is used specifically to collect user personal data via analytics, ads, other embedded contents are termed as non-necessary cookies. It is mandatory to procure user consent prior to running these cookies on your website.
SAVE & ACCEPT